This page contains useful information regarding the performance of the RFC Production Center (RPC). It includes news items (updated as needed) and stats about production that are updated on a quarterly basis. 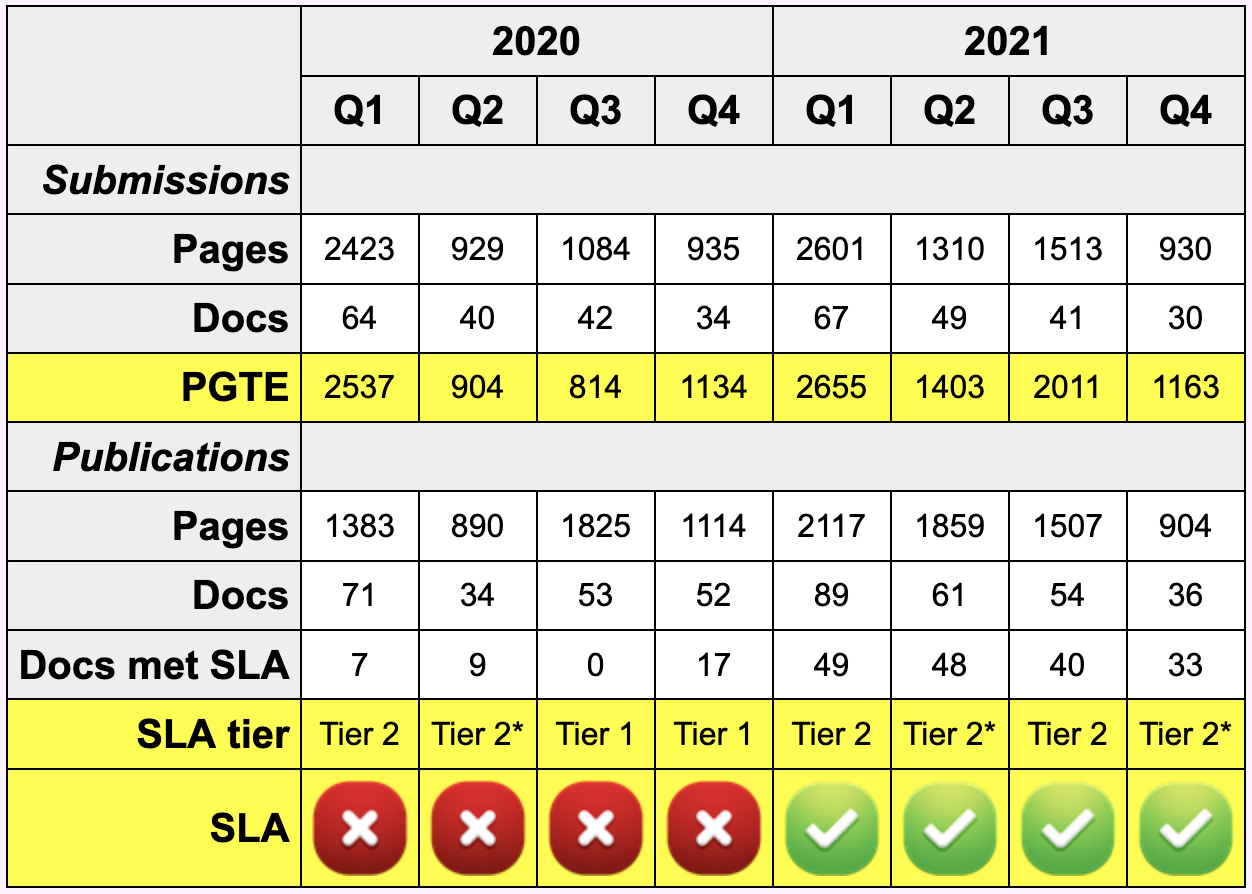 “Tier 2*” indicates when Tier 2 is being applied in the “subsequent quarter” as mentioned above. The gray boxes denote the period during which the SLA has been suspended because of the v3 transition. 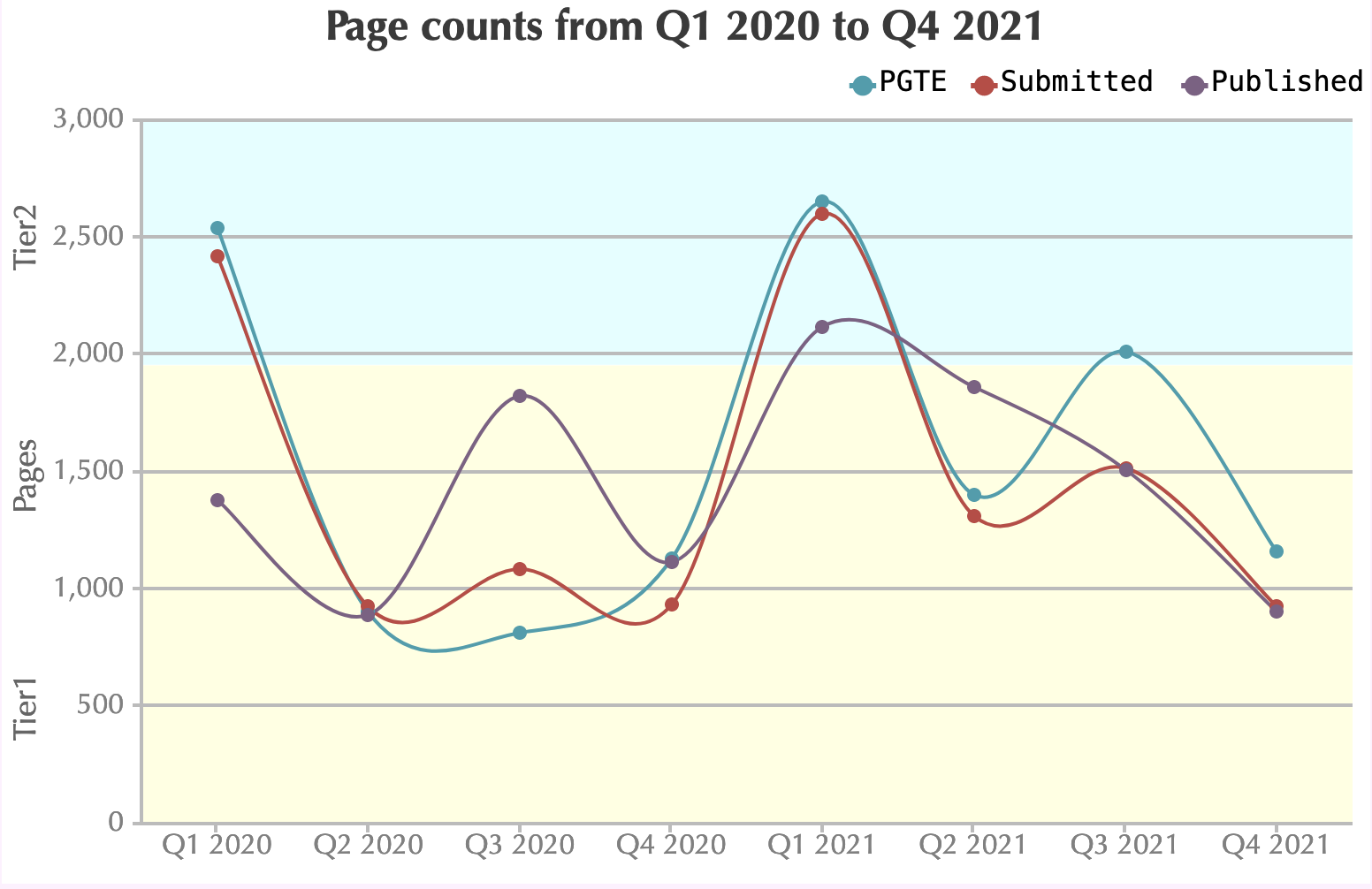 Q3 2021: 54 RFCs were published in Q3; 33% were part of a cluster. Only 41 Internet-Drafts entered the edit queue this quarter, but they are the equivalent of 77 average size RFCs. The I-Ds entering the queue were approximately 40% longer than the average published RFC over the last 5 years.

Q2 2021: 49 Internet-Drafts (1403 pages) were added to the publication queue and 61 RFCs (1859 pages) were published in Q2. PGTE returned to the normal range after exploding in Q1, where PGTE was the highest it has been since 2015. Figure 2 shows the decrease in submissions from Q1 and the steady rate of publications this year. Figure 3 shows that the workload in the various states remains relatively stable so far in 2021 and resembles the queue size just prior to the transition to v3 XML.

With the Streams’s adoption of “Guidance for NIST Staff on Using Inclusive Language in Documentary Standards”, the RFC Editor encourages all authors to apply the guidance described in that document when writing and editing their documents. The RPC will ask authors to review the language in their documents, though changes will are not required. (See the IESG Statement on Inclusive Language for more information.)

Q1 2021: 89 RFCs were published in Q1, about half of which were part of C238.
Figure 3 shows when they were published in January as the number of documents (and page counts) declined sharply. Subsequently, the queue grew significantly, as the largest number of documents (and page counts) in two years moved into the EDIT queue (234% increase over the previous quarter). Figure 2 shows the sizable increase in documents submitted, moved to EDIT, and published.

Q4 2020: With 209 RFCs published in 2020, and much of C238 in AUTH48-DONE (or nearing AUTH48-DONE), we’re seeing a return to more normal processing times. 33% of the documents were published in 6 weeks or less (Tier 1). This is a significant improvement from earlier quarters in the year.

Note: A majority of the 50 documents comprising C238 have extended processing times, so we do not expect the improved processing times to be reflected in the SLA until Q2 of 2021 (i.e., after C238 has been published).

Q3 2020: We are a year out from transitioning to v3 XML and most issues have been resolved. We are starting to see a change in processing times, despite what Figure 1 is showing.

As noted in Figure 2, publications have outpaced document submissions, which indicates that the queue size is decreasing. In addition, Figure 3 shows a significant drop in pages pending RFC Editor action, and fewer pages in any active state overall.

Q2 2020: There was a submission spike at the end of Q1, which is not unexpected when there is IESG changeover. As shown in Figure 3, there was also a spike in the number documents in RFC-EDITOR state. This is because the major3ity of C238 (40+ documents) and the 600+ page draft-ietf-nfsv4-rfc5661sesqui-msns moved into RFC-EDITOR state. The RPC is actively working on releasing C238 to AUTH48.

Q1 2020: We said goodbye to Heather Flanagan, who had been the RFC Series Editor since 2012, and welcomed John Levine as the Temporary RFC Series Project Manager.

Publications were slow in January. This is largely because C388 (14 IASA2 docs) didn’t complete AUTH48. Also, some staff time has been dedicated to C238 (41 active docs); portions of C238 will begin moving to AUTH48 shortly.

Q4 2019: With the RPC systems having been updated to handle v3 XML in Q3, the team successfully completed converting all AUTH48 documents to v3 XML and reinitiated AUTH48. Authors were asked to review the newly produced v3 XML and output files. 40 v3 RFCs have been published.