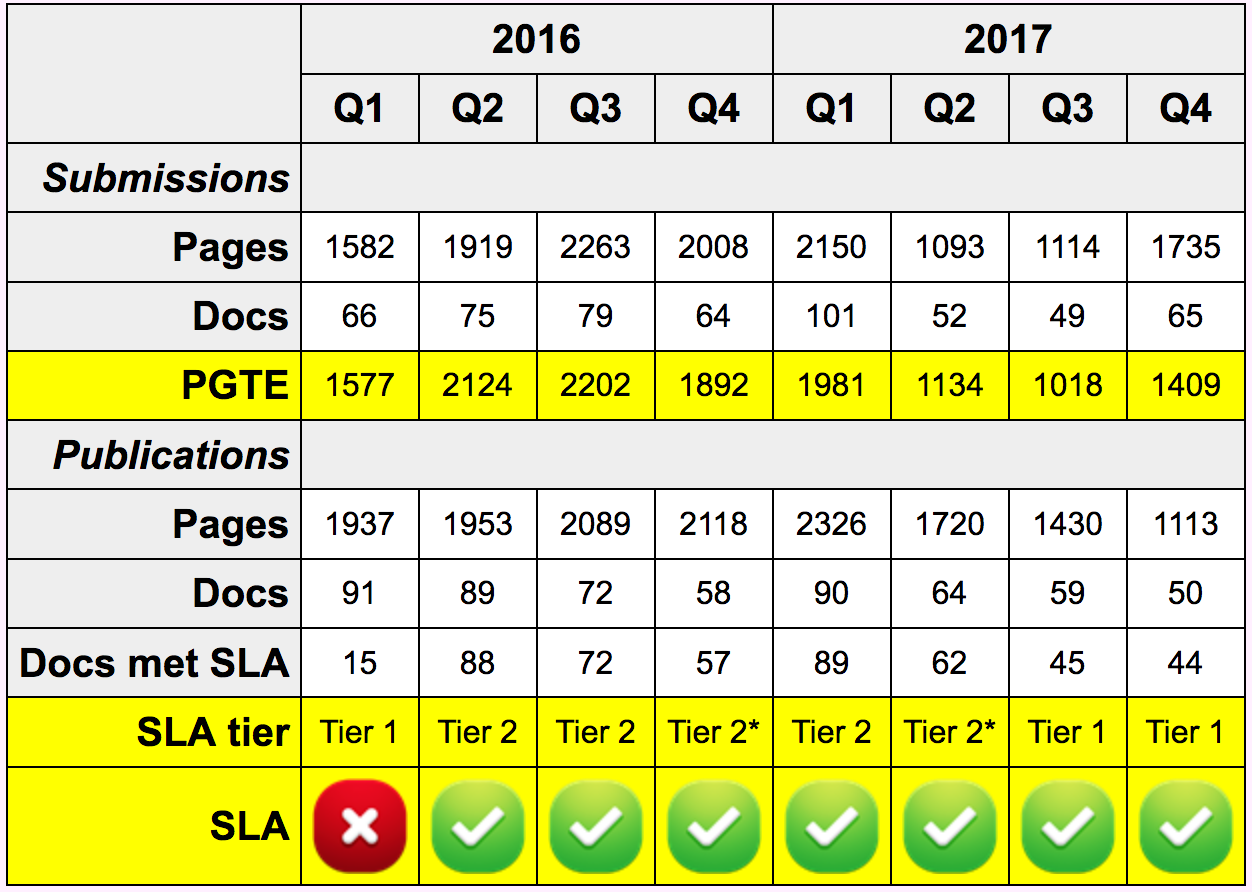 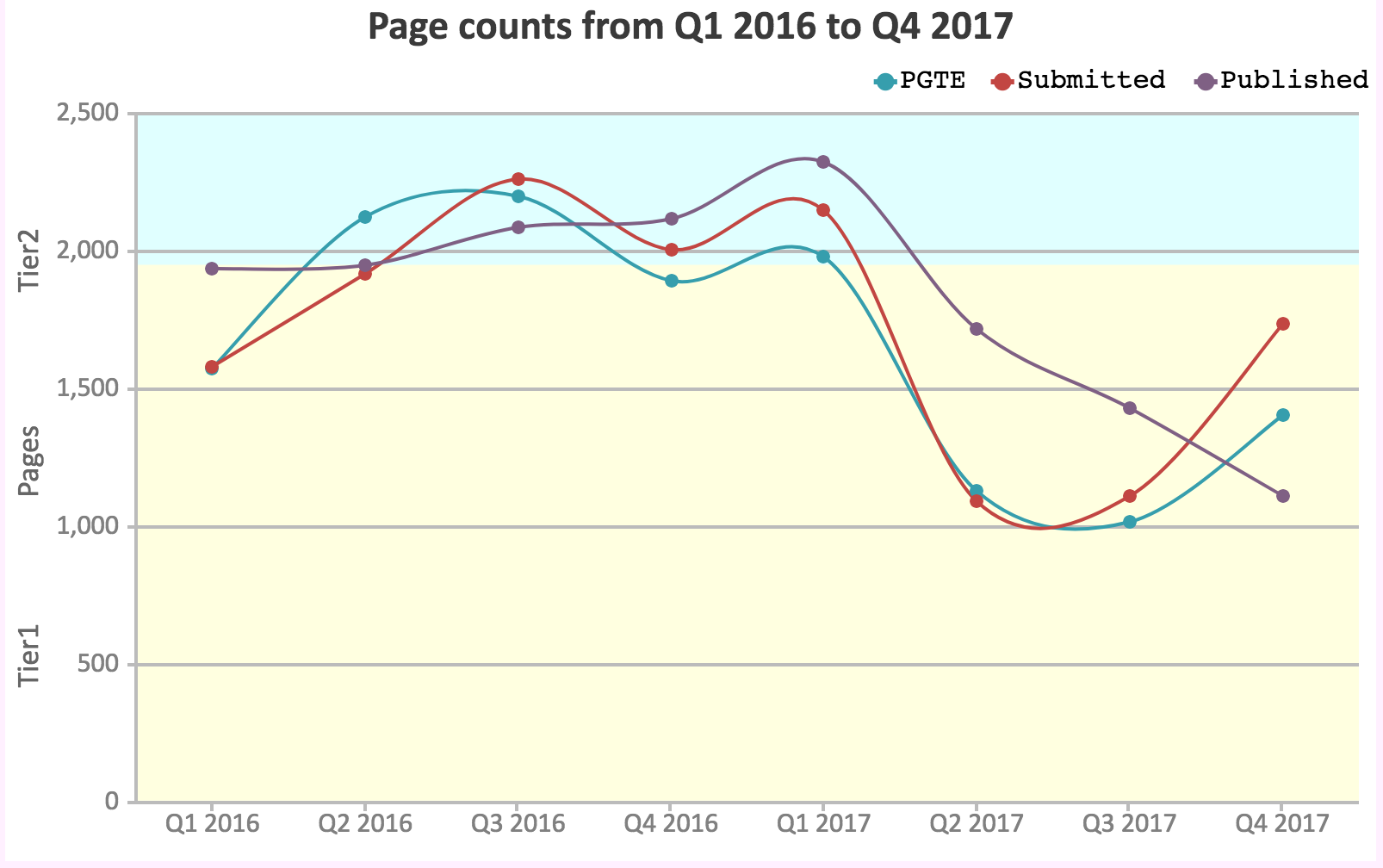 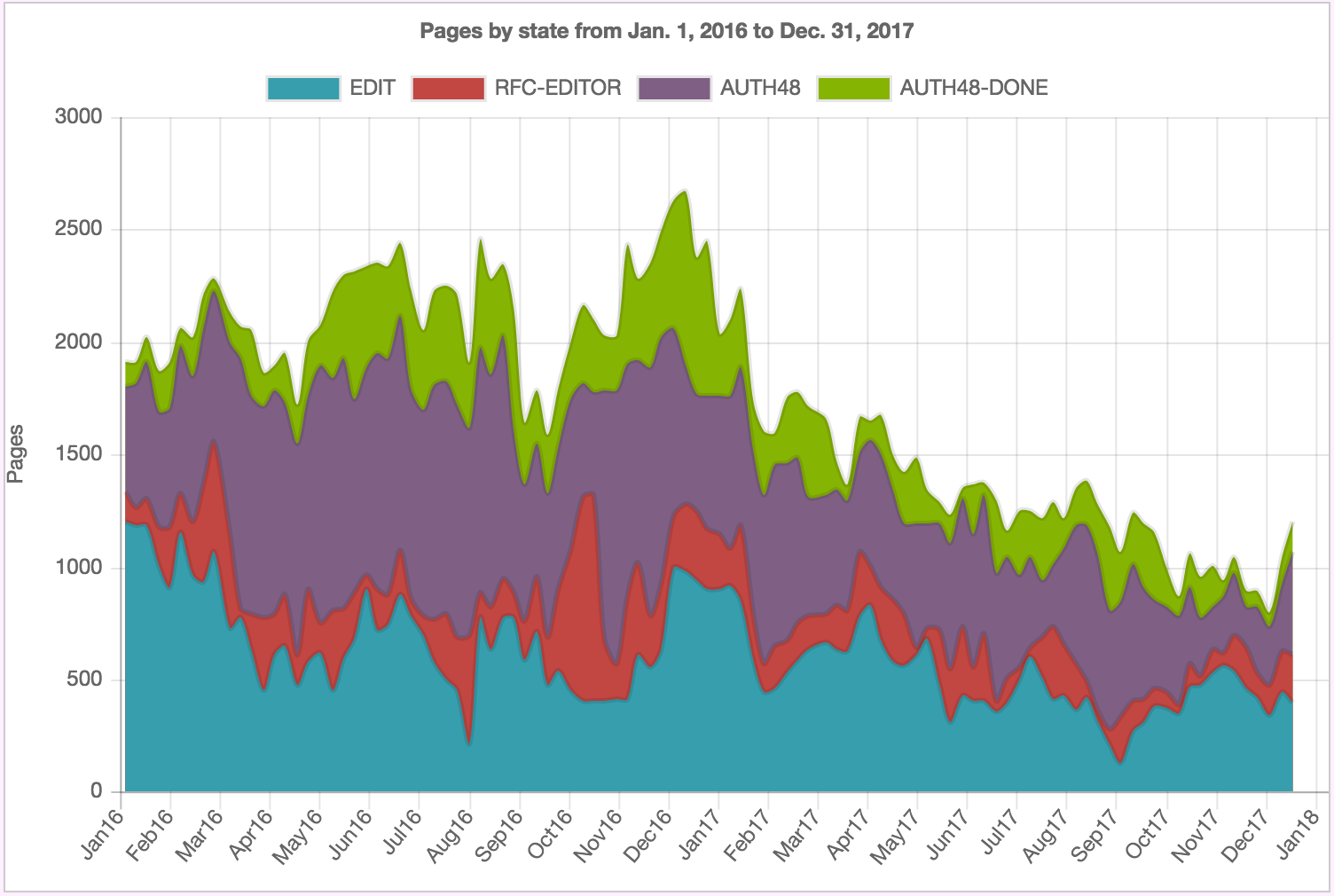 Q2 2017: In response to requests on the rfc-interest list, stable and “pretty” URLs are now available for RFC errata entries. They appear as <https://www.rfc-editor.org/errata/eidXXX>. This means that errata references can contain a URL for a specific erratum. The RFC Style Guide will be updated to incorporate the new URLs.

Tool testing related to the xml2rfc v3 format has begun. The RPC is actively testing and providing feedback regarding id2xml. In addition, the RPC is evaluating how the existing tools handle UTF-8 characters.

Q1 2017: We experienced the typical Q1 surge in document submissions associated with the March changeover in the IESG. The RPC published the largest number of pages in a given quarter within the last two years.

The editors dealt with a complicated AUTH48 for portions of Cluster 238, as reference chains were not strictly dependent on normative references, but informative also (per author request). So far this year, 36% of the published RFCs have been part of a cluster.

Q4 2016: Q4 has been quite busy, as the Format-related documents have been published, an expedited request for draft-ietf-netmod-routing-cfg has been completed, and a declaration in response to a legal request has been completed. Publications were slow in Q4, but quite a few clustered documents were stuck in AUTH48 and AUTH48-DONE (see Figure 3). Also, note that while the number of publications was low during Q4, the number of pages published was the highest this year.

Q2 2016:
As shown in Figure 4, the distribution of page counts in primary processing states has remained steady for the last four months, with AUTH48 leading for highest page count. The number of pages in EDIT is down 46% since the peak in November 2015, while the number of pages in AUTH48 has increased 35% during the same time frame.

Q1 2016:
The SLA and Work Standards associated with the RPC contract have changed. The change is significant in that it moves from reporting document counts to page counts, takes the incoming workload into consideration, and is measured on a quarterly basis. This page has been updated to reflect the new requirements set forth in the SoW and Work Standards.

The IESG requested expedited processing for the Cluster 268. C268 is 202 pages, which means it’s equivalent to 8 average-size documents.

With the Q1 PGTE finally returning to a more normal rate after 4 consecutive quarters of elevated document submissions, the RPC has managed to work through a significant portion of the queue. As seen in Figure 4, there are 53% fewer pages in EDIT and RFC-EDITOR and there are 48% more pages in AUTH48 and AUTH48-DONE since the close of 2015. In addition, processing times are coming down; the average time in EDIT and RFC-EDITOR states has decreased by 48% during Q1.

December 2015: Throughout the year, about 40% of the documents published had an RET of 6 weeks or less. Publications have been pretty steady throughout the year, with an average of 25 RFCs being announced per month. However, the submission and “moved to EDIT” rates have been bursty and have been higher than usual. For 2015, the submission count (352 documents) was the highest it’s been since 2011 (364 documents, which is the record for the RFC series). This has made it difficult to keep up with the expected processing times. See the graphs below for more details about the submission bursts and the number of documents in the various processing states.

October 2015: The RPC released the new RFC Editor website and monitored feedback. In the latter half of the month, staff prepared for IETF 94 in Yokohama, Japan.

September 2015: The legal inquiries mentioned in August were resolved with declarations (i.e., a deposition was not required). See the IAOC’s subpoenas page for details. Staff also prepared for the transition to the new RFC Editor website set to be released October 1.

August 2015: In addition to the usual document processing, the RFC Editor has been working on responses to two legal inquiries, one of which will likely require a deposition.

July 2015: Typically, the rate of input to the queue (i.e., documents moved to EDIT) decreases following the Q1 burst; however, we have not seen the usual dip which means processing continues to be impacted.

June 2015: There have been and continues to be a significant number of complex clusters in play in 2015 (documents from another 3 clusters were published this month).

July 2015: While the graph shows just over 30 documents moving to EDIT state, the page count is equivalent to 43 average-size documents.

May 2015: We are seeing a significant impact on the RFC Editor processing times as several clusters make their way to publication. Cluster 241 (C241), the jose/oauth cluster of 9 documents, was published as well as RFCs from eight other clusters. Of the documents published this month, 58% were associated with a cluster. Processing time for cluster documents are usually longer as the editors work through consistency issues within the cluster.

While the submission rate dropped, the number of documents released into the EDIT queue was more similar to a typical submission month.

April 2015: The submission rate returned to normal in April and a couple of the smaller clusters exited the queue.

March 2015: The Q1 surge continues, as another 39 documents were released into the EDIT queue. The table above is showing the impact of the Q1 surge in submissions on the processing times. In addition, a number of large and complex clusters are making their way through the queue. Publications increased in March, as clusters C182, C184, C232, and C240 exited the queue.

February 2015: The Q1 surge continued in February, with 36 documents being released into EDIT. The RPC continues to work their way through the surge and the clusters released in January. We just missed the SLA, as 67% of the RFCs were published in 6.3 wks.

January 2015: The RFC Editor is experiencing the typical surge associated with the March IETF meeting (IESG changeover); the number of submissions has increased significantly this month. In addition, sizable clusters were released into the EDIT queue, e.g., weirds (C240), which includes 5 documents, and jose/oauth (C241), which includes 9 documents.