Criteria for a successful errata system

Replace the concept of errata with a system that would allow anyone to comment on an RFC, with the RFC Editor or stream controllers to mark some concepts as important. The 'errata system' would be a system of comments, not a system of discretely managed items. Comments that stream controllers (or their delegates) mark as important could then be shown through an “errata” link. Alternatively, there could be a general 'mod up/down' [1] system that anyone with a datatracker account could use to indicate the importance of the entry. The RFC Editor could handle unambiguous typos

A single website that presents errata of this sort as highlighted in a different color on the presented RFC, rather than as comments that are in a separate visual stream from the presented RFC. I would like errata to be done similarly, if they are verified by someone who can check whether a new consensus is required to affirm the erratum. 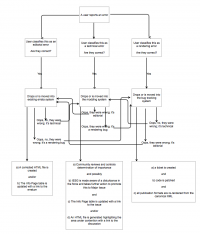 Additional diagrams or descriptions required for the approval processes